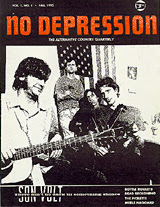 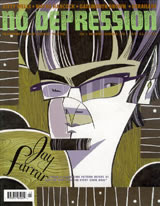 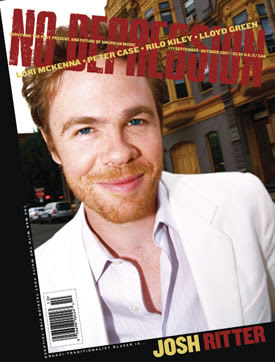 Today's news that influential alternative country (whatever that is) magazine No Depression will cease publication with its May-June 2008 issue will generally be greeted by a massive shrug. Ask the guy sitting next to you what he thinks about No Depression - my guess is you're getting a blank stare. And that's a shame. Because thirteen years ago, it was going to be different.
By the end of 1994, Uncle Tupelo, a blistering great three piece from Belleville, IL, had seen its mixture of American punk rock and classic country music scale impressive artistic heights with each of its four cds. Their final cd, Anodyne, stands as a landmark alt country touchstone, and I recommend anyone reading this to purchase all four Uncle Tupelo albums if you don't already have them. NOW! I'll wait...
Before cd leaks and impossibly easy mp3 proliferation and distribution, there was the more difficult medium (at least to copy and spread around) of early album releases on cassette. On a balmy May night in 1995 a ridiculously good (and ridiculously loud) Bottle Rockets show (Brian Henneman take a bow) at a perfectly seedy dive in suburban Philadelphia (Rex's in West Chester - I belive only recently shuttered and the site of a just as ridiculously good Lucero show in April 2006) was the the perfect scene for Son Volt mach 1. A friend passed me a tape of three songs from Son Volt's upcoming debut disc, Trace. To tell you I played that tape 200 times would not be an exaggeration.
And today I want you to hear those three songs - as good as any three songs on any album in the last 15 years - "Windfall", "Tear Stained Eye" and "Route" - and revel in any music that makes you hit rewind (now repeat) 20 times in a row, drive 200 miles to see a concert, spend hours debating the merits of Son Volt v. Wilco or compels you to comb your hair in a thousand ways.
Because if any of the above makes sense to you, then you should miss No Depression. They championed Son Volt, Wilco, the Jayhawks, Blue Mountain, Drive By Truckers, Alejandro Escovedo, Dave Alvin, Kelly Willis, Whiskeytown, Freakwater, Peter Case, Ryan Bingham, Lucero, Rilo Kiley, Josh Ritter and hundreds of others.
They believed.
"Switching it over to AM
Searching for a truer sound
Can't recall the call letters
Steel guitar and settle down
Catching an all-night station somewhere in Louisiana
It sounds like 1963,
But for now it sounds like heaven"
Windfall mp3
Tear Stained Eye mp3
Route mp3
Posted by Trip McClatchy at 11:04 PM

This is very sad news. I will miss No Depression.

And you're right -- all four of those Uncle Tupleo albums deserve to be in everyone's music collection.

Rex's in West Chester? Is that where we saw 2 Cow Garage? What a great venue for the small bands.

No Depression turned me on to a lot of great music over the years. I haven't read it much recently, so it's probably my fault that they're closing up shop. mea culpa.