Sarah Borges - It Comes To Her Naturally 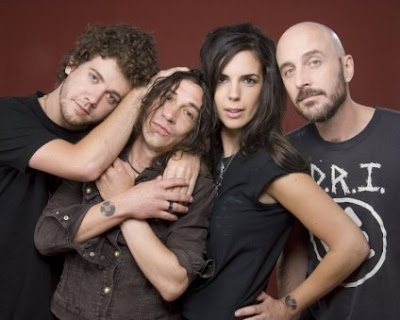 Coming on like an explosive cocktail of retro rockabilly hipster, punk rock scuzz and Marisa Tomei, Sarah Borges seems to straddle many genres and yet embdies rock and cool. The title of her third album, The Stars Are Out, could be read as self-deprecating self-promotion, or a celebration of the diamonds un-earthed with a record geek's joy of exposing some under appreciated songwriters.
Gone are the more overt country flourishes of the first two records, replaced with a meatier, slicker sound that will hopefully expose her to a wider audience. The leadoff single "Better At The End of The Day", is a weary self-examination that can't help but believe in moving forward, and a sure fire hit if Bonnie Raitt covers it. Speaking of Ms. Raitt, maybe Borges' Rockpile-ish cover of NRBQ's "It Comes to Me Naturally" can spark radio airplay just like "Me And The Boys" did for Bonnie. It's by far my favorite track on the album. And it's nestled among many other superb covers - "Ride With Me" (Lemonheads), "No One Will Ever Love You" (Magnetic Fields - maybe a full disc of Stephen Merritt covers in her future?), a jangly take on Smokey's "Being With You" and the rockabilly new wave twist of Clive Gregson's fantastic "Yesterday's Love". Where Are All The Nice Girls indeed?
Sarah Borges And The Broken Singles appear this Saturday (May 3) at World Cafe Live. Their live show is not to be missed. But if you do, you get another chance on July 24 at XPonential Music Festival at Wiggins Park in Camden. More dates here.
Sarah Borges And The Broken Singles - "Better At The End of The Day"
Sarah Borges And The Broken Singles - "Stop And Think It Over"
Posted by Trip McClatchy at 11:05 PM 1 comment: 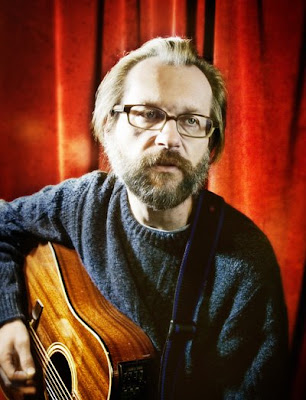 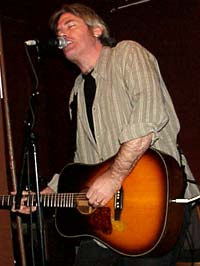 Get the kids in bed early - Wednesday, April 22 is alt-country night at The Fire!

Come on down to check out scruffy turtle dove and despondent Flyer fan Scott McClatchy (my little brother!) with rock and roll lifer and noted author ( Cheese Chronicles) Tommy Womack do their one man, one guitar heroics. You'll get two terrific songwriters spinning tall tales, with hearts bursting on sleeves, winning converts one pug at a time. It's intimate, it's cheap and if you actually get your ass down to Girard Avenue, the first round's on me.

And I'll bet you if you pester him, Tommy'll play "The Replacements". ("Cause when they were good, God got up to dance!")

You won't be sorry.

Every Day Should Be Record Store Day 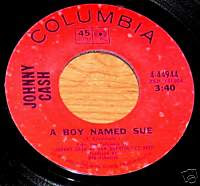 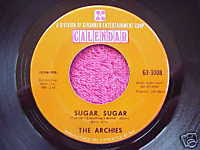 I spend a lot of time on the computer - it's a key component at work (think of work without your computer), it's the vehicle for 90% of my home music listening and of course there's the countless minutes spent creating this little blog. But I also love to get off my butt and get outside, sometimes just to go right back inside again.
This past Saturday was National Record Store Day and I celebrated at my favorite indie music store (do chain music stores even exist anymore?) Main Street Music in Manayunk (they can special order you anything at 215-487-7732). And I truly felt like a kid at Christmas - live music, sidewalk sales, bargains galore, the Springsteen 7" (got it!), the Gaslight Anthem 10" (yes!), the Waits 7" (ok - 2 out 3 ain't bad), beer and... for this day at least, lots and lots of people. People have been in short supply lately in record stores, sometimes becoming scarcer than that Jesus Lizard 7" or that Pavement 10".
-
But people showed up... and kept showing up all day. There were the regulars (who mostly came for the beer and the tomato pie), the old customers who had disappeared, the kids who love Good Ol' War, and even rarer still - the passerby, the window shopper. And they browsed, and they bought and they had actual human interaction. Shoulders were slapped, recommendations were shared (I hope you like The Felice Brothers, tall bearded customer), cds were sold, kids loaded up on armfuls of gently used vinyl and the cash register rang like it hadn't in ages.
I know a lot of folks do not have handy access to local record stores, but to those who do - please go and support them. Paying $5.00 to $10.00 for an album of files just feels like you're getting shortchanged - just like the recent insurance commercial series that shows unwitting dupes getting a hot dog with no bun, a popsicle with no stick or a car wash with no rinse. You deserve a bun!
There were brief live performances by Australia's Youth Group (great Aussie pop that recalled a mix of The Church and Paul Kelly), local hero Dave Hause of The Loved Ones' tough, prickly agit-folk and the sweet, melodic harmony-rich kids' darlings Good Old War.
And as I surveyed my stash I recalled the adrenaline rush from my first record store purchase (Woolworth's in Ardmore, 1970) with money saved from my incredibly successful leaf removal business. I bought two 45's and my fading memory says the cost was 49 cents each - they were "Sugar Sugar" by The Archies and a "A Boy Named Sue" by Johnny Cash ("Yeah! What could I do?"). I think every music purchase I've made since then can be traced back to those two records.
THINK INDIE!!
Johnny Cash - A Boy Named Sue
The Archies - Sugar, Sugar
Posted by Trip McClatchy at 11:13 PM 2 comments:

A few shares from the inbox.

First is Hogni, an artist from some place called the Faroe Islands (you got me). Don't know much about him, but I know he likes to mix the drums loud. Sort of Peter, Bjorn & John meets Beck.

Shill is a trio from Nashville, but the sound is more New York, especially the singer's oh-so-Tom-Verlaine warble (that's a good thing). The album, In There Somewhere, is available now.

Speaking of New York, Trip and I are both digging Self-Taught Learner, the new EP from the Big Apple's own Lissy Trullie. The literature refers to Lissy as both a "she" (imagine Patti Smith with way more cool detachment) and a "they" (a four-piece calling to mind The Strokes with a little less cool detachment). Whatever "it" is, it's good.

Harry Kalas - The Boy of Summer


"The memories will be so thick they'll have to brush them away from their faces. People will come Ray. The one constant through all the years, Ray, has been baseball. America has rolled by like an army of steamrollers. It has been erased like a blackboard, rebuilt and erased again. But baseball has marked the time. This field, this game: it's a part of our past, Ray. It reminds of us of all that once was good and it could be again. Oh... people will come Ray. People will most definitely come. "

In Philadelphia, one person has truly represented what we truly love about baseball - Harry Kalas. Any kid from nine to ninety can and will give your their Harry the K home run call. Harry Kalas was comfort food for the soul, tonic for a franchise that finally delivered a long dreamed about championship last October after years of futility. For four decades of summers it was as much fun to listen to the Phillies on the radio as it was to watch them on TV. And for 27 years. Philadelphia was doubly blessed to have Harry Kalas and Richie Ashburn as an unmatched broadcasting duo.

Today Harry joined Whitey and a city not known for its compassion pauses to remember one of the area's unforgettable icons. In the coming days, weeks, months and years the home run calls will be made by a new set of announcers but a vast majority of fans will only hear two words... "Outta here..."

Harry Kalas Calls The Last Out of The 2008 World Series

We'll miss you, Harry.
Posted by Trip McClatchy at 11:15 PM No comments:

Pour Some Sugar On Me

Reminiscent of my tenth birthday, when my father, the occasional hunter, gave me a Winchester 22, last week my five-year-old, on the occasion of my forty-first, presented me with a copy of the Jonas Brothers’ album A Little Bit Longer. I’ve already derived more pleasure from it than I ever did from that rifle.

It’s 21st Century bubblegum, modern power pop served with two lumps of sugar. Disposable, sure, but when the cataclysmically melodic guitar break comes on “Lovebug,” and then when they double-voice it, Thin Lizzy-style, it’s also indispensable. The hipsters won’t get it, but the little girls understand.

For Real... with Jeremy Fisher


Posted by Trip McClatchy at 11:41 PM No comments:

The Final Four (this Saturday in Detroit!) is a trademarked NCAA term that denotes the four basketball teams left standing on the precipice of a national championship. Making it there is almost as difficult as making a great record. To do it more than once is magical – and to reach that goal four times is mystical – as it takes a great run of talent, timing and good fortune. UCLA won 10 NCAA titles in 12 seasons from 1964 to 1975, an unbelievable run that may be the equivalent of The Beatles, Stones and Dylan’s astonishing 60’s-70’s creative streaks. It just doesn’t happen anymore.

Aristotle held that there are four causes in nature, four things that answer the question why a thing is – the material cause, the formal cause, the efficient cause and the final cause. St. Joe’s often ran a “four corners” offense with great skill as they knocked off bigger and more skilled basketball teams. Baseball’s ultimate play is a home run, or four-bagger. Basketball’s highest scoring play is a four point play (a three and a foul shot). The number 4 gave birth to albums by Foreigner (4), Blues Traveller (Four), Miles Davis (Four!) and Led Zeppelin (IV… and yes I know it’s those stupid symbols). There is the Fab Four, the Four Tops, the Gang of Four, the quartet that practiced in the park and the prototypical rock band lineup of four members.

There are the Four Horsemen (of Notre Dame and of The Apocalypse), the Fantastic Four, Four Evangelists (Matthew, Mark, Luke and John) and four teams that have had their defensive lines nicknamed the Fearsome Foursome (the ’57 Giants, the ’62 Lions, the ’63 Chargers and the ’65 Rams). There are four seasons (winter, summer, spring, fall, winter), The Four Seasons (“Sherry”), “Four Seasons” (Vivaldi), The Four Seasons (hotel) and The Four Seasons (a 1981 rom-com), not to mention the gorgeous “Four Seasons in One Day” by Crowded House.

Four is the smallest composite number. The Greek word for four, tetra, inspired Tetris, my favorite video game (I will kick your ass). There are four human blood groups, four suits in cards, you can use 4 in place of four or for when texting, four wheels make us go, four directions tell us where to go and who among us doesn’t love to utter the occasional four letter word.

And that brings us to the daunting task of picking artists with four great albums, a totally subjective exercise in examining productivity and fleeting artistic achievement. There really aren’t that many that have made four GREAT records – many have made one, two or three, but four is a difficult mountain to climb. And the ones that did seemed to do it in 3, 4 or 5 year bursts. Genius (at least when it comes to making records) is fleeting and the muse seems to leave just as quickly as it arrives. So a special nod to Tom Waits and John Prine for spacing out their greatness over 20 years.

One ground rule – only artists who made their first record AFTER 1970 are considered, so no Beatles, no Stones, Dylan, Stevie Wonder, Otis Redding, The Band, Johnny Cash, Kinks, Van Morrison, Aretha Franklin, Led Zeppelin, etc – that list would just be too long.
So after much internal deliberation and debate, here are twenty (plus one) that gave us four (or a couple more).