The Del Lords Get Tough... Again!! 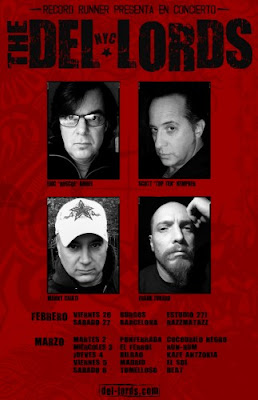 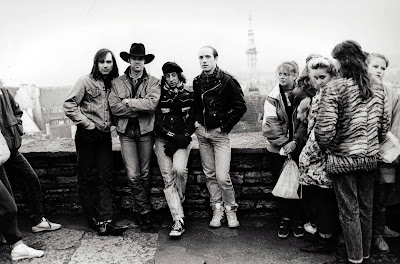 "This is better than Facebook..." cracked drummer Frank Funaro Tuesday night as the Del Lords brought to a close their first New York show in over 20 years at guitarist's Eric Ambel's cozy postage stamp of a bar, the Lakeside Lounge, where it seemed everybody knew everybody, or at least everybody knew somebody in the band. Billed as "Happy Hour with the Elvis Club", the Del Lords hosted a crazy intimate party as a warm-up for a two week Spain trek (they left yesterday morning) and as a way of assembling family, friends and aging rockers to celebrate the legacy of one of the 80's great forgotten bands.

The Del Lords released four albums that were revered by critics, veteran punk rockers and roots-rock geeks... and nobody else. These guys were New York tough, and staked their claim as leaders of a mid-80's rock renaissance that melded the punk rock spirit of 1977 with the direct, gut punch immediacies of heroes like Chuck Berry, Johnny Cash and the Flamin' Groovies.

Ripping right into the propulsive rocker, "True Love", it was clear the hallmarks of the Del Lords sound were intact - the one-two guitar punch of band architect Scott Kempner and go-to alt-country producer-host Eric Ambel (an under-rated guitarist, who only plays exactly what is needed... and not a note more), the off-kilter gang harmonies, and the lean, muscular attack that gave us current TK faves like The Bottle Rockets, Lucero and The Hold Steady. "How Can A Poor Man Stand Such Times and Live", although written in 1929, has never been more relevant, and the years just float away as the band blazes through this americana classic. It's the first of five songs from Frontier Days, their 1984 debut, and along with set closer "Heaven", elicits the most rapturous response.

There are a handful of other older songs (even "Some Summer", a recently unearthed outtake included on the recent reissue of the excellent Johnny Comes Marching Home) , a reverential take of the Flamin Groovies' "Jumpin' In The Night" and two new songs - the fatalist inertia of "When The Drugs Kick In" and the existential crisis of "This Job is Killing Me", a bluesy riff-heavy meditation on day-to-day perseverance. Kempner notes that after the Spain tour, the band will finish recording a new album. If you can't wait, there is a 5-song EP, Under Construction, that's available from the Del Lords' website.

The verdict? Hell yes it's great to have The Del Lords back! A pioneer in the roots punk genre that also gave us Jason and The Scorchers, Rank And File, The Blasters, Los Lobos, Scruffy The Cat, The Beat Farmers, E-I-E-I-O, Guadalcanal Diary, Gear Daddies, Long Ryders and Lone Justice, let's hope 2010 sees a belated celebration of some true rock and roll believers.

The Del Lords - Heaven
Posted by Trip McClatchy at 2:05 PM No comments:

Nothing could be finer than a little Darcie Miner 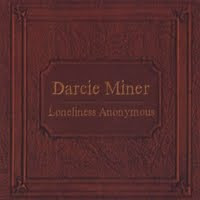 I could never make it in the music biz for the same reason I could never be a scholar of Russian literature: I don’t speak the language. It’s not a lack of interest; it’s a lack of comprehension. For instance, while major labels invest millions in a string of musical mediocrities, a genuine article like Darice Miner has to fight and scrape and self-release a batch of songs as fine as Loneliness Anonymous, a heartfelt (and occasionally ass-kicking) album that ought to make her a star in the world of alt.country. Explain it? I can't even understand it.

The obvious comparison is Kathleen Edwards, a heartfelt ass-kicker if ever there were one, but Darcie’s no copycat. She mines the same territory of love and loss and Stonesy guitars, projecting a persona as much strong and sassy (not everyone could credibly pull off a song called “Bad Habits and You’re Full of Shit”) as delicate and twangy. If you’re here because you like the same sorts of music we like, this one is for you. If you’re here by accident, and you like Kathleen Edwards, Lucinda Williams and Sheryl Crow’s first three albums, this one is for you, too.

It's a roots rock extravaganza at the hippest club in town for a bargain basement price. Not only that, but that hip club, Johnny Brenda's, actually lets you know each band's set time... in advance! So come on out Wednesday night for three full sets at 9, 10 and 11 for the low, low price of $12.00.

9:00 - Kicking off the night's festivities is Jason Boesel, the former Rilo Kiley drummer whose husky drawl sits comfortably between a laid back Robert Earl Keen or an amped-up Townes van Zandt. There's a lot of West Texas in this California cowpoke, and this promising debut, Hustler's Son, is full of lightly burnished and slightly bruised alt-country that has enough memorable choruses ("Hand of God", "New World Mama" and "French Kissing", which Boesel should send straight to Tim McGraw) to warrant repeated listens.

10:00 - Cory Chisel and The Wandering Sons debut full length, Death Won't Send a Letter, is a perfectly pleasant set of soulful rock and roll that modestly succeeds based on Chisel's strong gruff voice, but too often settles for bland MOR fare. But I'm betting his live show will be more urgent and ultimately more satisfying than what he serves up on record.

11:00 - Headliner Dawes (who are also serving as Jason Boesel's backing band for this tour) are a young Southern California quartet whose slow burning, harmony filled Laurel Canyon take on The Band's earthy magic was one of the best debuts of 2009. There's a bit of Counting Crows angst on songs like "The Western Skyline" and "God Rest My Soul", but with the Crows' melodrama replaced by a placid beauty that takes several listens to really seep in. Fans of Crosby, Stills and Nash, Fleet Foxes and John Prine need to hear these guys.

Three bands, twelve bucks, free parking and the friendly confines of Johnny Brenda's. See you there.

Dawes - "That Western Skyline"
Dawes - "When My Time Comes"
Posted by Trip McClatchy at 9:15 AM No comments:

The Knack... And How To Get It

Pop music has ways to move you that simply can not be explained. A simple melody, a memorable riff, teenage heartbreak, a scream, a nasty backbeat - The Knack provided all that and more. 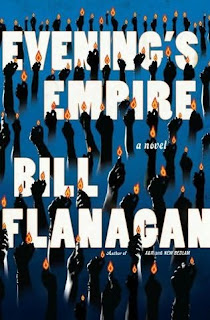 Recently, I had two great pleasures. One was reading Evening’s Empire, a funny, sad, heartwarming and unfailingly entertaining novel about growing up and growing old in rock and roll. The other was interviewing Bill Flanagan, the book’s author, as decent, smart and generous a guy as you could hope to meet. When Flanagan isn’t writing terrific books, he’s making editorial decisions at the MTV Networks, where he serves as executive vice president.

I’ve read plenty of fiction set in the world of popular music, and even excellent writers have trouble capturing the feel. Not Flanagan. Every word in Evening’s Empire is note-perfect, which perhaps shouldn’t be a surprise: The guy has actually lived the life. But most folks who have lived the life couldn’t possibly render it in such vivid, rewarding prose. You don’t have to love rock and roll to enjoy the book – it’s far broader than that. But if you do love rock and roll, Evening’s Empire is required reading.

My interview with Mr. Flanagan can be found in The Providence Phoenix.

While probably best known as the most famous musician draft dodger, Jesse Winchester created at least one stone cold singer-songwriter classic - his now 40 year old (!) self-titled debut, which includes such enduring AAA evergreens like "Biloxi", "The Brand New Tennessee Waltz" and the stately "Yankee Lady". It wouldn't be a stretch to say that Winchester's 70's output provided the template for Lyle Lovett's early success. His 1970 album also included "Snow", which perfectly sums up my cantankerous feelings about the current weather situation currently plaguing the Northeast.

But the reason I'm writing today is a more recent vintage Winchester tune, "Sham-A-Ling-Dong-Ding", first encountered via a Youtube video at my friend Pat's insistence about a month ago over beers at my favorite record store, Main Street Music in Manayunk. It's a sweetly evocative story song that's as well constructed and every bit as sentimental as Carl and Ellie's heart-tugging romance mosaic at the beginning of last year's Pixar smash Up. I think Neko Case would agree.

with my own little box!

Absolutely charming video that perfectly crystallizes all that was right (and often wrong) with the MTV-ization of music.

It's definitely worth checking out the video's source, the 1982 Aussie musical farce fantasy Starstruck, available from Netflix.
Posted by Trip McClatchy at 11:56 PM No comments: 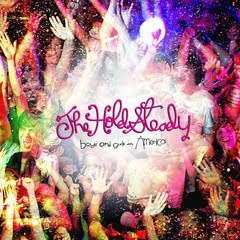 No album has ever rewarded my faith quite like the third offering from The Hold Steady, the band that came out of nowhere and reignited my love for for rock and roll. In the very first post made on this site, my only half-tongue-in-cheek belief in the greatness of this album – which I had not yet heard – undergirded my declaration that The Hold Steady was already my sixth favorite artist of all-time. A month later, the album came out and did the impossible: It exceeded my expectations. It also cemented the friendship on which this place was built, feeding the rock-geek fandom of two near-strangers who kept asking each other, incredulously, “can you believe how good this is?”

If you’ve spent any time at all on Teenage Kicks, we don’t have to tell you a thing about Boys and Girls in America. We’ve already said it all before. And if you’re new here, just type the band’s name in the search box and start reading. Even if you’ve never heard this band before, still you’ll get the metaphor, you’ve known people who loved rock and roll before.

For us, Boys and Girls in America is a great, great record, the easy choice in a sea of worthy contenders. It’s also the hub of a community, the same kooks who enrich not only our blog, but our lives – Mary, Lou, the many McClatchys (Kevin, Scott, Beth, etc.), Feeney and the entire crew at Main Street Music, Art, everyone at WXPN, T.J., Scott, Don, Peter, BagOfSongsTom, Daniel R, Dan D, Bill C, Michael M, Juanita, Ms. Suki, Todd P, Andy Whitman, Kurt, Claire, Futureboy, Josh H, a small army of well-intentioned spammers, special guest commenters (if you’d told me when we started that Steve Rushin and Mister Zero would both stop by, I would never have believed it), and every other person I should have named but didn’t (you know who you are).

For all the musicians who inspired this list, we can’t wait to hear the 100 albums that will move us to write in 2019. It’s a thrill to think of all the great unheard music that will soon fill our lives. And for all the friends who visit us here, it will be a thrill to share it with you.