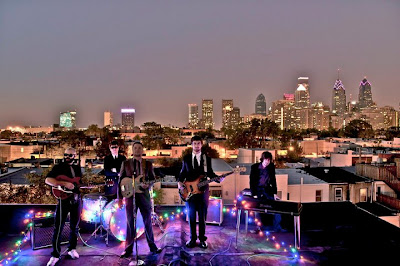 Come out tonight for a sure fire triple bill at Johnny Brenda's (how many time do we have to tell you JB's is the best rock club on the planet?) featuring the stellar Philly trio of Southwork (11:15), National Rifle (9:15) and Teenage Kicks pick-to-click The New Connection (10:15).

The New Connection has the pop smarts of The New Pornogrpahers, but filters their songs through various lens, including the prog-pop of Yes, the piano swells of Ben Folds, the irresistble bop of your favorite punky reggae party and the lush harmonies of Philly psych stalwarts, Dr. Dog. All these elements mesh effortlessly on their brand new self titled record they'll no doubt be showcasing tonight.

Go and get yourself connected. Make 'em play the dreamy "Yours" and get lost in the gorgeous chorus.

Take the Money and Run

There’s been some press lately celebrating the tenth anniversary of Our Band Could Be Your Life, Michael Azerrad’s book detailing the stories of thirteen American indie rock bands in the 1980s. I haven’t read it since shortly after its release, but I recall the book being fascinating, entertaining and maddening. What I found maddening was how bands seemed to cease to exist once they signed with a major label, or at a minimum how they seemed to become minimized in importance, as if moving from one business model to another diminished them or made their music less good. But several of the bands, like Sonic Youth, Husker Du and Dinosaur, Jr., made terrific records for majors. And if you forced me to choose between the albums the Replacements made for Twin/Tone and the ones they made for Sire, I’ll take the latter. As a listener, I care about the sonics, not the economics.

In a recent interview, Azerrad continues to tout the indie ethic while broadsiding indie bands who cash in anyway they can:

Your book details an “us-versus-them” mentality in the eighties underground scene which really doesn’t seem to exist anywhere nearly as much in contemporary indie bands. Does that mean these recent bands aren’t quite the heirs one would hope for? Have they sold out?

The line’s definitely blurred. Now you have this little indie band called Matt and Kim, or Neon Indian, who have recorded for Green Label Sound, which was Mountain Dew’s label. Mountain Dew is awful stuff. Or Spoon’s music, selling Jaguars. I guess part of it is pragmatic: “Well, we’re not selling records so we have to get our music heard, and to get some money to make more music, we have to license this song for a car commercial.” I’d really like to see the economics of that because it seems like a lot of indie bands do quite well on the road selling concert tickets. I wonder how much they really need the money.

“I wonder how much they really need the money.” I don’t know what that’s supposed to mean. How much they need to rent an apartment this month? This year? Enough to buy groceries? To have health insurance? How about enough to pay for braces for the kids they haven’t had yet?

If anyone should know that the shelf-life of the average band – even the average very good band – is tragically short, it’s the guy who chronicled the Minutemen and Mudhoney. It’s nice to think that members of a band like that can make a good living recording and touring into their dotage, but for most of them, it ends. And few of those endings come with a golden parachute.

Buffalo Tom was better than 99% of the bands that came out of the era, and they still record and play. But bandleader Bill Janowitz is now a real estate broker Monday through Friday because there’s no economic security in being in an indie rock band.

The truth is, a few months away from our 25th anniversary as a band, we still manage to get out there and tour every once in a while, playing to a peak of 1500 in Brussels, or to a low of maybe 75 people in Portland the other night. But like the indie bands outlined in Michael Azerrad’s book Our Band Could Be Your Life — bands that, in the mid- to late-1980s, paved the way and formed a foundation for groups like us — we still have a devoted, if modest audience. We, in turn, have influenced many bands. And all of that that encourages us to keep trying to balance the cottage industry we have in music business with grown-up responsibilities like families and jobs. But it is increasingly difficult, financially, physically, and mentally, to tour or play to diminishing crowds. Of course we understand. Most of our audience is also in their 40s, and have kids and demanding careers. They live out in the suburbs, most likely. And we have to play weeknights as well as whatever weekend nights we can book. And who wants to go stand around in the rock clubs of their youth on a Monday or Tuesday night?

My advice to every young band out there: Sell as many Jaguars today as you can. Nothing is promised for tomorrow. Providing your kids braces doesn’t make you less of an artist.

Army Navy Called in To Save Power Pop! 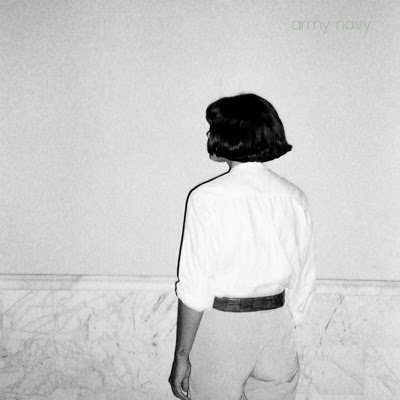 A couple years ago we touted west coast power pop savants Army Navy's fab redo of disco queen Maxine Nightingale's "Right Back Where We Started From" the best cover song of 2008. We can live with that choice.

Today the boys announced that album # 2, The Last Place, would drop July 14 on their own Fever Zone Records. Lucky emusic nerds get an exclusive four week window to be the coolest kids on the block starting June 14. Check out "The Long Goodbye" from the new record and try to keep from swooning.

Army Navy - "Right Back Where We Started From" (from Army Navy)

I recently encountered a quote from the late English poet and jazz critic Philip Larkin that struck a little too close to home. Before I was born, Larkin decried modern jazz and other forms art contemporary art because they "take what was once among our pleasures, and place it among our duties."

My urge is I to repudiate the thoughts of a man who derided Miles Davis, Thelonious Monk and John Coltrane, who couldn't abide Charlie Parker, who just wanted to bob his head and tap his feet. But I understand what he meant.

When I hear Animal Collective or TV on the Radio and scratch my head, I know I'm on the wrong side of history, though I suspect that I might one day catch up. After all, it took four or five years of bemusement before I embraced OK Computer, and now it's indispensable (perhaps I'll feel the same about The King of Limbs five years from now). I don't want to be the fogey who drones about the old days, but I also won't lie: last year's Deerhunter album isn't without its charms, but I'd still rather spin Beggar's Banquet.

One of the great pleasures of my adult life has been this blog and the relationships that have grown up around it. For the first couple of years, we were on fire; the joy we got from rock and roll spilled out uncontrollably. And then one day I decided to put my email address up on the site, and it has never been the same. Since then, we've been inundated with messages and mp3s from bands and promotions people we would otherwise never have heard of. There are gems in there, but there's a whole lot of stuff I don't understand, and a ton more I never hear; this is a hobby, not a job, and there's no way I can get through it all, so eventually the inbox gets cleansed sound unheard.

Life gets busier, too, with kids and commitments and tilting at the occasional windmill, as I did in the first few months of the year. But even as I've neglected this space, I haven't given up on rock and roll, though I routinely find myself looking for comfort, not adventure. When in doubt, I always fall back on the Rolling Stones, and January was spent with my nose in Life, Keith Richards's impossibly entertaining and frequently maddening memoir, in which the man who is rock and roll to me crashes cars, starts fires, throws knives, devours drugs and then whines when Mick Jagger doesn't trust him to make business decisions. In February, I dug deep into the Darkness on the Edge of Town box set, mesmerized by video of Springsteen in his fighting-trim prime and by audio of the classic album he left on the cutting-room floor. Then March was devoted to the long-awaited reissue of Nick Lowe's Labour of Lust, an endlessly tuneful and wry record that sustained me through the nervous nights leading up to a local election. But it only reinforced my feelings of being a man-out-of-time to listen to Lowe's "Switchboard Susan," a song about a girl with a job that doesn't exist anymore.

In an effort to bring myself into the here and now, a couple of weeks ago I went to see The Arcade Fire play. I don't think I had seen another band at the same sort of creative and commercial peak since U2 in 1987. Win Butler and his wife Regine Chassagne led the eight-piece collective through a spellbinding show that crested with "Wake Up," an all-time set-closer. The band's thoroughly modern take on what is essentially folk music featured members moving from instrument to instrument, keyboards to hurdy gurdy, drums to guitar, bass to piano. I was about ten rows back in a regal old amphitheater packed to close to its 8,000-seat capacity when the crowd exploded into the wordless sing along of "Wake Up," and I felt something I hadn't felt in years, being in the center of something powerful, contemporary and seemingly without antecedent. In the moment with the band of the moment.

At show's end, as the lights came up and we began to shuffle out, Richard and Linda Thompson's "I Want to See the Bright Lights Tonight," a married couple's powerful reinvention of folk music, now thirty-seven years old, came over the PA, and I laughed because I had never made the connection. What's old is new again.
Posted by Michael Atchison at 3:02 PM 1 comment:

Miss Liam's sneer? Believe Beady Eye could use a little zip? Pine for the fabricated Blur vs. Oasis hype? Think youth should be served? Then fire up the stereo and crank this "song of the summer" contender up... LOUD! It's Brother or Brother (UK), depending on your residence, and they are four pasty mutts from Slough (UK) planning world domination. You have been warned. Hat tip to Lou for the heads up.

Brother - Darling Buds of May