Sessions at 23 East with Scott McClatchy 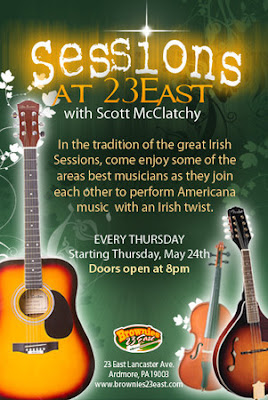 For the last 8 weeks, Scott McClatchy and his group of vagabonds, fiddlers, losers and lovers have been lighting up Brownies 23 East with a loose limbed jam that features Celtic reels, folkie standards and country and western weepers. It's fun for boys and girls of all ages. Doors open tonight at 8:00 and the music gets going around 9 or so. And it's free. And there's beer (not free, but some good specials). And the tunes are top notch. What's not to love?

Where - Brownies 23 East (23 East Lancaster Ave. - Ardmore)
When - Every Thursday around 9:00 (maybe a little earlier)
Cover - A recession-busting zero dollars!!


Posted by Trip McClatchy at 11:22 PM No comments: