Behold The Power of Rock and Roll 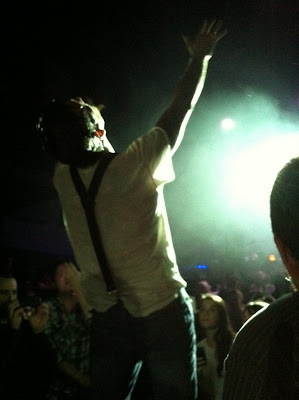 photo: Hudak
Posted by Trip McClatchy at 12:15 AM 4 comments: 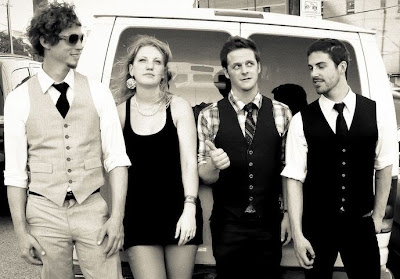 Here's a late heads up for all you Philadelphia couch potatoes looking for a reason to leave the house tonight - the pride of Fort Collins, CO, Fierce Bad Rabbit, scampers into the M Room as the headliner on a four band bill including Oh! Pears, Dad Rocks and Attia Taylor. Fierce Bad Rabbit are touring behind their excellent, brand new 3 song EP, Live and Learn, whose well scrubbed rock finds kindred spirits in the harmony heavy americana of Mumford & Sons, Dawes and Band of Horses. Lead singer Chris Anderson has a voice that would sound perfect on AAA radio. Let's hope those programmers take notice.

And I'm all in for a future all Rabbit tour - Fierce Bad Rabbit, Frightened Rabbit, White Rabbits and Pepper Rabit. 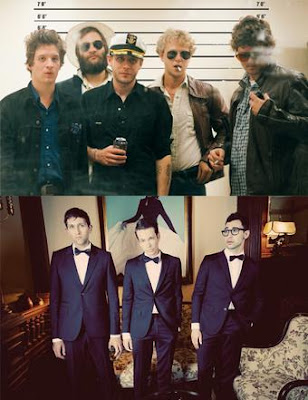 While that headline would work for any Deer Tick show, it takes an absurd literal turn Friday night as emo-freindly heartbreakers fun. share the stage with your favorite scuzz rockers at the University of Pennsylvania's Harrison Auditorium. Me? I really love both bands but I wouldn't have put them together on the same bill on a dare.

You know that girl whose nose is a little crooked, wears skinny jeans and ragged t-shirts, buys you a beer when you're down, can stay out late and not complain, has nerdy glasses and knows everyone? Who doesn't read but is whip smart, smokes when the moment is right and never seems alone? The one all the guys want and all the girls want to be? Well Deer Tick is that girl. And they've even got a cute friend. Let's call her Divine Providence and she's BOS. Fresh of a surreal appearance on Letterman, they'll both be in town for what's sure to be one of the weirder pairings in recent memory. I am asking the music gods right now for duet featuring John McCauley's boozy creak paired with Nate Reuss' woozy falsetto. I vote for either "Don't Go Breaking My Heart" or "I Got You Babe". Let's call it He & Him.

fun. (complete with lower case "f" and a period as part of the name - a Google nightmare) are a couple of years removed from their dizzying debut, Aim and Ignite, which sounded like Freddie Mercury preening with the Beach Boys during a Broadway casting call, but it worked. They've got a new album in the works and so far have dropped one single "We Are Young", a collaboration with Janelle Monae that shows the band heading in a busier direction with eyes on the dance floor (expect many remixes), but with vocal harmonic histrionics intact. 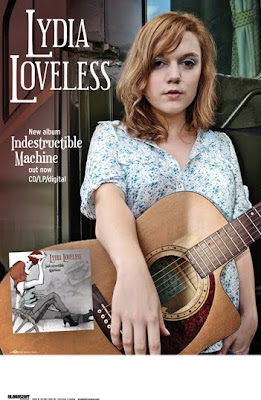 In my post yesterday, I inadvertently linked to another mp3 rather than "Steve Earle", the stalker fantasy rave-up by 21 year old upstart Lydia Loveless, who makes her Philadelphia debut Friday night at Fishtown's M Room. So today we bring you "Steve Earle" plus a track from her 2010 Peloton Records debut, The Only Man. You can order Indestructible Machine here and The Only Man here. Both are highly recommended.

Get thee to the M Room Friday night. 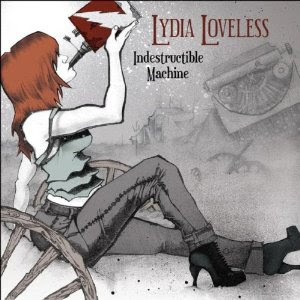 2011 is the 25th anniversary of Steve Earle's Guitar Town, so I guess it's also the 25th anniversary of my being able to stomach country music. Prior to that, it was classic rock, punk rock, power pop and AM radio that filled my listening hours. Guitar Town is not only one of rock and roll's great debut albums, it was also a gateway drug to Waylon, Merle, Willie, Gram and a thousand others.

Earle has quite the career since - Grammy winner, drug addict, actor, divorce attorney's dream, novelist, activist, absentee father, record producer, playwright - but it's the songs that keep us riveted. That and the mystical puzzle for the ages of how he pulled Alison Moorer.

And now 21 year old Lydia Loveless (who name conjures up a goth country diva) has written "Steve Earle", a fitting "tribute" that paints Earle as a stalker of sweet young things who "won't stop calling me" and "just wants to write some songs", but all Lydia wants is for Steve "to please introduce me to your son", the ultimate backhanded compliment. And it's just the tip of the iceberg for Indestructible Machine, Loveless's brand new firecracker of an album, out now on Bloodshot Records. The album traffics in that Old 97's galloping backbeat, but recasts Rhett Miller as Loretta Lynn.

But mostly this album recalls the glory and go-for-broke-ness of the debut Lone Justice record, especially on the roiling "Bad Way to Go" and the unapologetic war cry of "Do Right." Loveless may not possess Maria McKee's wondrous range, but that's really praising by faint damn. Loveless is a take-no-prisoners storyteller, the freshest new female alt-country voice in recent memory.

Just for fun, I've also attached another "Steve Earle", this one by sappy country megastars Sugarland. This one sounds like Elly May Clampett first stalking then squawking Steve Earle. And finally a gorgeous, brand new cover by Kasey Chambers of Earle's "Nothing But A Child". Enjoy.