Posted by Trip McClatchy at 11:54 PM No comments:

Anthony D'Amato - Paper Back Bones (Appearing in Philly on 6/3!) 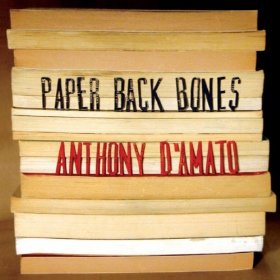 Still in his early 20's, Anthony D'Amato has released 4 albums, each one better than the last. Paper Back Bones, just out this week, isn't a huge departure from 2010's Down Wires, it just sounds a little bigger, a little lusher and definitely a lot more beat down. D'Amato's songs of death, desperation and doubt are colored by hauntingly sweet pedal steel and fiddle, not to mention the  banjo plonking that powers the sweet and sour love letter, album opener "But For You".


D'Amato's characters carry heavy burdens, most noticeably in "Arrowhead", a foreboding tale of a snake-bitten family that he performed at the 2010 Montreal Folk Festival for a songwriter showcase called "The Hurtingest Song I Ever Heard". D'Amato is a gifted writer with a keen sense of melody, and those sweet melodies are needed ease the strain of Paper Back Bones dark night. My favorite melody envelops "On The Banks of The River Where I Died", whose hot-button tale of a failed border crossing calls to mind the graceful storytelling of The Band (this would have been perfect for Levon to sing).


Closer "Ballad of The Sleepless" captures the early morning dread that night lovers face every day. And it brings the listener full circle from Down Wires opener "Ballad of The Undecided".


Anthony D'Amato is a finalist in the 2012 Philadelphia Songwriters Project contest. D'Amato plus 11 other singer-songwriters perform this Sunday (June 3) at The Blockley.

Posted by Trip McClatchy at 10:02 PM No comments: