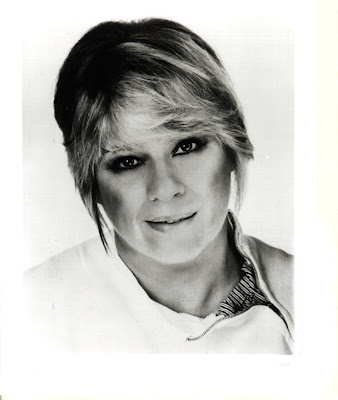 Brian Wilson is on record proclaiming "Be My Baby" the greatest pop record ever made. The Beach Boys had a hit with a mesmerizing version of "I Can Hear Music". Manfred Mann took "Do Wah Diddy" to the top of the charts. Perhaps the greatest Christmas song ever recorded is "Christmas (Baby Please Come Home)". What do all these songs have in common? They were co-written by Ellie Greenwich, who died Wednesday at age 68.
.
Brian Wilson told the L.A. Times that Ms. Greenwich was "the greatest melody writer of all time". It's impossible to imagine a time when her songs were not part of the rock and roll lexicon - they are timeless paeans to love's first blush and all the joy and heartbreak that inevitably follows. Her writing partnership with husband Jeff Barry was fostered in the Brill Building atmosphere of hyper-competitiveness alongside some of American music's greatest writing teams - Burt Bacharach and Hal David, Gerry Goffin and Carole King, Jerry Leiber and Mike Stoller, Doc Pomus and Mort Shuman and Barry Mann and Cynthia Weil.
.
Check out this mind-blowing, utterly staggering list of songs written by Ellie Greenwich:
The Ronettes - "Be My Baby"
The Ronettes - "Baby I Love You"
The Ronettes - "Walking in The Rain"
The Ronettes - "I Wish I Never Saw The Sunshine"
The Crystals - "Then He Kissed Me"
The Crystals - "Da Doo Ron Ron"
The Crystals - "Little Boy"
Bob B. Soxx & The Blue Jeans - "Why Do Lovers Break Each Other's Hearts"
Darlene Love - "A Fine, Fine Boy"
Darlene Love - "(Today I Met) The Boy I'm Gonna Marry"
Darlene Love - "Christmas (Baby Please Come Home)"
The Dixie Cups - "Chapel of Love"
Ike & Tina Turner - "River Deep - Mountain High"
The Jelly Beans - "I Wanna Love Him So Bad"
The Shangri-Las - "Leader of The Pack"
The Butterflys - "Goodnight Baby"
The Beach Boys - "I Can Hear Music"
Manfred Mann - "Do Wah Diddy"
Tommy James & The Shondells - "Hanky Panky"
.
There are hundreds more as well as countless covers, and we've chosen a special few to be shared with the discerning readers of Teenage Kicks:
.
Bruce Springsteen - "Then She Kissed Me"
Bruce Springsteen - "Christmas (Baby Please Come Home)"
Mink Deville - "Little Girl"
Beth Orton - "I Wish I Never Saw The Sunshine" (devastating!)
.
And as an added bonus for reading this far, my favorite track from the two disc comp, The Red Bird Story, called "Everybody Come Clap Your Hands" by a Moody & The Deltas, an absolute monster of a song by this guy:

Moody & The Deltas - "Everybody Come Clap Your Hands"
Posted by Trip McClatchy at 4:11 PM 2 comments: 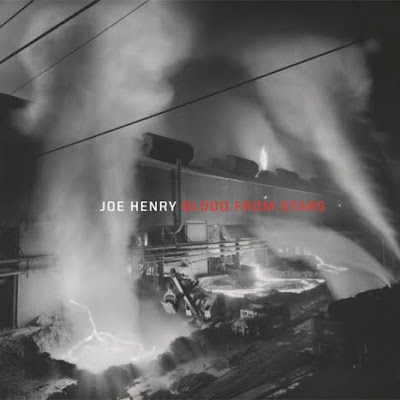 In the American Idol-age when everything is spectacular but nothing is good, a guy like Joe Henry doesn’t stand a chance. You have to listen a few times for the subtleties to emerge, the beauty to take hold. But once you’ve started to inhabit the songs, they start to inhabit you. The whispers come on like jackhammers. The quiet builds to a roar. The words left unsaid begin to shout. No one else in music today wields restraint quite so ruthlessly.

I’ve been an unabashed Joe Henry fan for fifteen years or so now, as he has made gentle stylistic shifts, from straight alt-country (Kindness of the World) to slinky, urbane funk (Fuse) to ethereal noir jazz (Tiny Voices). But with his last two albums, 2007’s Civilians and the brand new Blood From Stars, all the flavors have simmered and married. There’s no more blues, jazz, folk or funk, there’s just Joe Henry music.

I’ll leave it for others to give the detailed reviews, but suffice it to say that Blood From Stars is an exceptional, immensely enjoyable record (is it, as Andy Whitman writes, a masterpiece? That’s a heavy word. Get back to me in a few years). It builds slowly, in smoky Henry fashion, and peaks ten songs in with the mesmerizing “Suit on a Frame.” Henry’s crack band, highlighted by ace guitarist Marc Ribot (who made his bona fides at the side of Tom Waits and Elvis Costello), achieves pure grace throughout, and acts as an extension of his artistic voice. Henry’s words tell truths through striking ambiguities, underpinned by a sound that is meticulously constructed and flawlessly executed. Think of it as Steely Dylan.

Like all of Henry’s best work, Blood From Stars makes me want to put on proper clothes, drink good Scotch and read great books. As Jack said to Helen in that film, Joe Henry makes me want to be a better man.

Speech Debelle may be an unfamiliar name stateside, but in her native UK she has been nominated for the Mercury Prize, an album of the year award that shines light on ascending talents. Speech Therapy is a treat, fully of jazzy backdrops and Ms. Debelle’s hard-swinging cockney.

I don’t know much about the band War Tapes, but they make a hellacious synth-heavy racket, combining a solid pop sensibility with just the appropriate amount of menace.

I’m a sucker for the laconic, studied cool practiced by the legion of New York bands that have adopted their best Velvet Underground pose over the past four decades. The latest band in the lineage is called Darlings, and their Yeah I Know album has been working its way under my skin for the past few weeks. 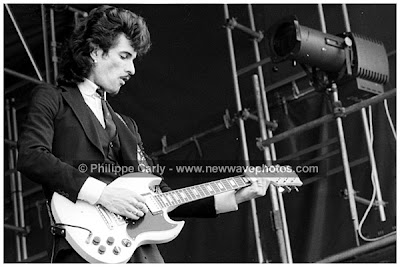 Born of the New York class of ’77 punk scene, Mink DeVille stood apart from other CBGB acts by taking their cues from such varied influences as 50’s soul, New Orleans funk and Cajun music, rockabilly and especially gut-bucket rhythm and blues. They had filtered out the dissonance of what would become punk rock and created a rock and soul hybrid that seamlessly blended Ben E King’s Spanish Harlem, Van Morrison’s Gallic soul and the New York arrogance of the Velvet Underground. In short, they sounded like on else around.

They were bad-ass and sentimental, they were hard and tender, and in Willy DeVille they had one of rock’s all-time great frontmen, whose passionate, unmatched gritty delivery and shamanistic stage presence made them a riveting, not-to-be-missed live act. Their albums were full of lilting acoustic guitars and street corner castanets, fluttery accordions and subtle strings, stinging electric guitars and miles of attitude. The first time I saw them was at New York’s Palladium in 1978 in the middle of a bill featuring headliner Elvis Costello and The Attractions and show opener Rockpile. I won’t tell you Mink DeVille was the best of those three, but it was a photo finish. I saw them seven other times and they were never less than transcendent, even on Valentine’s Day 1986 when my sister and I forsake our gigging musician significant others to drive snow-blind in a raging blizzard to see the band at Asbury Park’s legendary Stone Pony. The police cleared the bar two songs into the show as they announced a “bomb threat” which turned out a back-taxes raid. Willy never missed a beat and even replayed show opener “This Must Be The Night”. Wotta night!

Willy DeVille is one of those artists (like Peter Case and Roddy Frame) that I never gave up on even when his records became harder and harder to find, many never even given a proper U.S. release. He was my little secret. His biggest brush with the mainstream in America were the critical acclaim and publicity that surrounded the first two Mink DeVille records, Cabretta and Return to Magenta. His best known song is most likely “Storybook Love” from the sublime The Princess Bride (I’ll spare you 800 words on why that’s the greatest movie ever made), which was nominated for an Academy Award in 1987 but lost to the goopy Dirty Dancing mutt, “(I’ve Had) The Time of My Life”. (inconceivable!)

I feel the best way to remember Willy DeVille is to share his music. Enjoy! 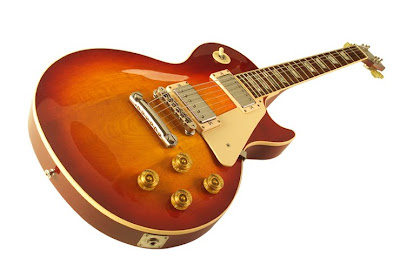 The Duke And The King - Nothing Gold Can Stay 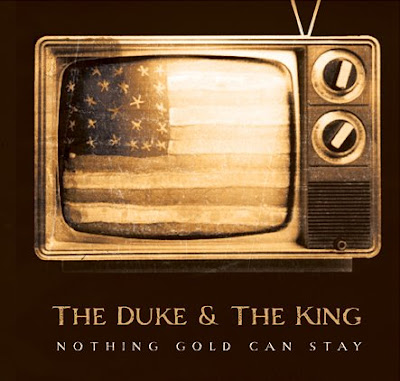 Remember the days when you would lose yourself for hours at a time obsessing over every word and every sonic detail about one specific album? Lock yourself in your room with the headphones on and be transported away from the day’s minutiae? Spend the day in a goose-bumped state of disbelief that somewhere a few musicians had holed up in a studio to create music that touched you so deeply? And then, when you came up for air, yammered endlessly trying to convince every sap who would listen that they HAD to have this record?

Well, if you’re like me (read: old), those days are rarer than a slugger who actually admits he’s on the juice. But I’m currently working through my rolodex (told you I’m old) trying to browbeat unsuspecting victims into giving a listen to Nothing Gold Can Stay, the debut disc by The Duke And The King, the bountiful result of a bleak winter’s woodshedding in Woodstock, NY between former Felice Brother’s drummer Simone Felice and Robert “Chicken” Burke, who’s collaborated with George Clinton, Sweet Honey in The Rock and Toshi Reagon.

The songs, born of personal heartbreak and deep reflection, are bathed in a melancholic haze of a nostalgic heart searching for a simpler time when music was all you needed to see you through. The end of “Union Street” sums it up: “Such a long long way to go, and nobody gets out alive, but just as long as we got rock and roll everything will be alright”.

While The Felice Brothers find inspiration in the freewheeling magic of The Basement Tapes and the ragged edges of punk rock, The Duke And The King look to the gentle soul of Sam Cooke and the passionate world embrace of Marvin Gaye, with shades of mid-period Bee Gees soul-chedelia, all delivered with the non-ironic, snark-free earnestness of prime Cat Stevens. Fans of Iron and Wine and Elliott Smith will be knocked out by Nothing Gold Can Stay.

Simone Felice’s haunting, quivering tenor is a major new voice who has fused americana and soul music to create the year’s best debut and an absolute lock for those pesky year-end best of list that will sprout like so many wild weeds in a few months. Not to mention his charismatic live performances, on display this past Monday at a suffocatingly hot, sold-out stop at Philadelphia’s coolest venue (OK, it’s tied with Johnny Brenda’s), the Chapel at The First Unitarian Church. The tiny Chapel (site of The Felice Brothers Philly debut a couple of years ago) brought out the sure to be growing faithful for a night of sweat-soaked commUnion as Felice led his four piece band through a sweat-soaked, emotional short set that comprised the highlights of Nothing Gold Can Stay and a few old Felice Brothers songs (“Radio Song”, a fiery “Don’t Wake The Scarecrow and show opener “The Devil is Real”). Felice’s smoldering, eyes shut intensity belied a gentle soul who delivered fragile, beautiful songs with a missionary zeal that thrilled the passionate crowd while evoking the spirit of a revival meeting . I know it’s impossible to quantify what makes someone a star, but Simone Felice has that elusive quality, that indefinable “it”.