How the Thermals Saved My Life 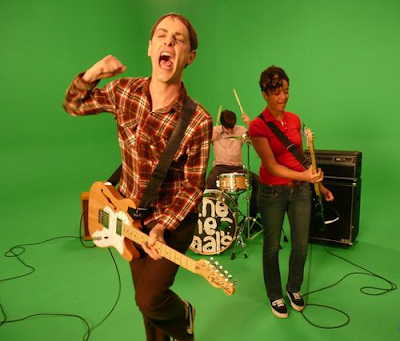 My life has encroached upon my leisure. I’ve recently taken on significant non-profit and for-profit projects (details to follow). My kids have reached the age of serial obligations (gymnastics, tee ball, dance, etc.) which seem to eat at the edges of every day. They’ve also discovered music and television of their own, which has slowly pushed mine to the margins. In the rare quiet moments, I’ve embraced the silence, guarded it zealously, and begrudged those who would take it from me. For the co-proprietor of a blog devoted to music, the result has been a historically fallow period. Thank goodness for Trip. Without him, this place would be gathering dust.

For a while, I thought that I had reached that point where music seemed not to matter so much. I’ve seen it happen to others, but I never thought it would happen to me. Through January, February, March and April, I just wasn’t interested. Sure, I bought things and gave them a spin. Some (A.C. Newman, the Felice Brothers) resonated, but most simply fell on apathetic ears.

So I went chasing music. I tried to latch on to Animal Collective’s Merriweather Post Pavilion, the buzz album of spring ’09. But for me, the Prog Rock of the Future is a lot like prepared fish. If done just right, it’s great, but way more often than not, I just don’t like it. And I kept chasing but not finding, until one day I decided to relax and let the music find me.

And then, like magic, it did. Lou sent an mp3 by e-mail. It was “I Let it Go” by The Thermals. I clicked. Six scratches on an electric guitar followed by the “POP-POP-boom-boom POP-POP” of a thunder-loud snare. Those four seconds alone would be enough to obliterate my musical ennui, but the song goes on, blasting up a mountain road, kicking gravel over the edge as it slides through the turns, cheating death all the way to the top.

I’ve listened to the song on the computer, on my iPod, and in the car at volumes that made my kidneys ache. I’ve sung along till my throat burns. I’ve danced in ways that have attracted attention from local authorities.

If the rest of the album, Now We Can See, fails to reach those stratospheric heights, it’s still pretty terrific, good enough that the Thermals would be minor legends had it come out in 1978, instead of marking them simply as keepers of the flame, a band like so many that have come before. And lest you think that the music is any less joyous because it’s the sort of thing that has been done countless times already, let me invoke the Ice Cream Principle: I’ve had ice cream thousands of times over the years, yet ice cream remains awesome.
And by blasting out the cobwebs, the Thermals have opened my ears to other great new things – Lissy Trullie, Roman Candle, Heartless Bastards and Wussy, to name but a few. They’ve also reminded me of who I am at heart. While my advancing age has allowed me to appreciate subtleties that would have escaped me in my youth (I’m looking at you, Nick Lowe’s last few albums), the thing I love best is still the thing I loved most when I was nineteen, namely the combustion of guitars, bass and drums, plus the adenoidal bluster of a singer flush with righteous rage. I may get old. Rock and roll never does.
The Thermals, "I Let It Go"
Posted by Michael Atchison at 4:59 PM 3 comments:

How Does It Feel? 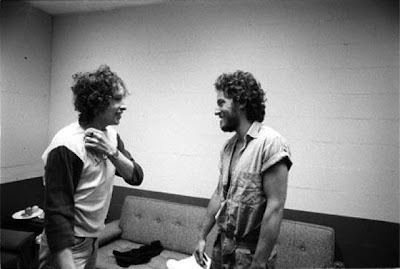 Blogger tells me this is the 500th Teenage Kicks post. What better way to celebrate than to present one of the all-time greatest rock songs by the greatest rock and roll live performer I've ever seen?
Bruce Springsteen - Like A Rolling Stone
Posted by Trip McClatchy at 11:40 PM 2 comments:

Apparently Rod Stewart was on American Idol the other night and continued to bludgeon his legacy. I can not, will not, shall not defend him, but for a five year period the guy had one of the great rock and roll winning streaks of all time. Courtesy of my brother Kevin, (great find, Doc!), here's a reminder of why many still get weak-kneed at the mention of "Gasoline Alley", or "Mama You Been on My Mind", or "Too Bad", or "Pool Hall Richard", or "True Blue" or "Handbags and Gladrags", or, or, or, or.... well, I think you get the idea.

A couple of interesting tracks from heretofore unknown (to me) bands hit the inbox this week. First is LoveLikeFire, a San Francisco quartet with a new EP called William. The first single from the well-polished, guitar-driven effort is called "Signs" and is available here. Also be sure to check out their MySpace page to hear "Stand In Your Shoes," a scorcher that isn't on the EP.

Next is six-piece New York outfit Linfinity, who dress like hipster morticians, and whose music is a melting pot of sophisticated art-rock influences. The single "Molly Mar of Rome" is a little Arcade Fire, a little late-period Roxy Music, and a hint of Hothouse Flowers.

Linfinity, "Molly Mar of Rome"
Posted by Michael Atchison at 4:10 PM No comments:

With Bruce and The E Street Band pulling out at least one different great cover (Clash, Kinks, Ramones!) every single night of their current tour, it's time for a Teenage Kicks sampler. Here's a video for the band's joyous, greasy garage band cover of the 1967 Soul Survivors (Philly represent!) hit "Expressway To Your Heart" from earlier this week at the Nassau Coliseum.


We've also got Bruce and the band with Social Distortion's Mike Ness in a truck stop gala version of "Bad Luck" from Los Angeles back on April 16. 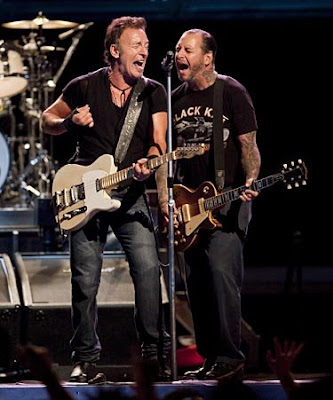 Bruce Springsteen & Mike Ness - "Bad Luck"
.
And, since my good friends Vince (in Atlanta) and Mary & Kevin (in Towson, MD) were out this week seeing The Gaslight Anthem without me (infidels!), here's a bonus cut from The '59 Sound. .
Gaslight Anthem - "Once Upon A Time"
Posted by Trip McClatchy at 11:15 PM No comments: 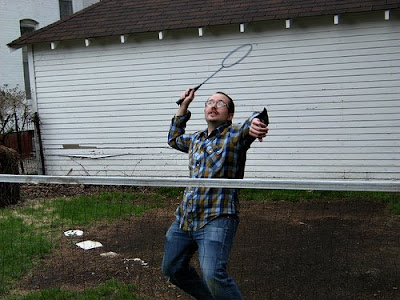 Team Love, home of The Felice Brothers, Tilly & The Wall and Jenny Lewis & The Watson Twins plus many others, frequently offers free music - some if it readily available elsewhere for your hard earned and some only available through The Team Love Library, which you can join for the princely sum of zero dollars.
The latest exclusive is from Nebraskan Dan McCarthy, the forlorn one-man band who mucks about as McCarthy Trenching, whose jaunty, acoustic take on Beyonce's # 1 smash hit "Single Ladies" is by far the greatest lo-fi one man band cover of an R&B diva anthem that I've ever heard.
McCarthy Trenching - "Single Ladies"
Posted by Trip McClatchy at 11:32 PM No comments:

The Duke And The King 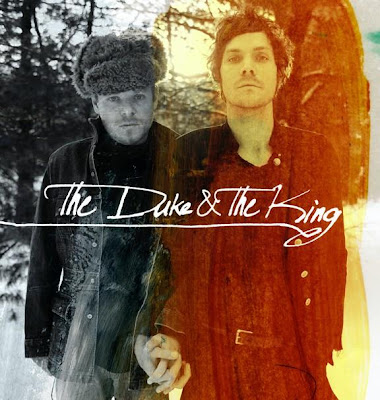 Q: What's the last thing the drummer said before he was kicked out of the band?

Well, Simone Felice has left The Felice Brothers and that's no joke. Oh the brothers will soldier on without him and their recent shows still explode in controlled , loose limbed chaos. But Simone was no ordinary drummer - he wrote lyrics, sang lead in his sweet choirboy voice and brought a sense of imminent danger and desperation to their frantic stage shows. The angel with a dirty face and quite frankly, the emotional soul of the band.

And now, after a period of "tragedy, sadness, and regeneration", he has emerged with The Duke And The King, a two man project with Robert "Chicken" Warren (Run Chicken Run?) and they'll be debuting later this month with a limited edition UK only 4 song EP followed by a full length album, Nothing Gold Can Stay, later this summer.

Here's the first track, "If You Ever Get Famous", a gentle piece of alt-country soul that lilts along like a wistful goodbye love letter. It's a stunner. Look for The Duke And The King on tour later this summer.

The Duke And The King - "If You Ever Get Famous"
Posted by Trip McClatchy at 11:31 PM 2 comments:

For those who dig jazz and/or insight into the mind of an obsessive fan, our buddy Hook has a new(ish) blog called Hook's Hidden Gems, where he shares thoughts about and sounds from some of his favorite old jazz LPs, espcially those that are rare or out of print. The topics range from titans like Duke Ellington to more esoteric figures (was I the only one who hadn't heard of Tete Montoliu?). The site is old-school vibe and old-soul cool, and you should check it out.
Posted by Michael Atchison at 10:34 AM No comments: