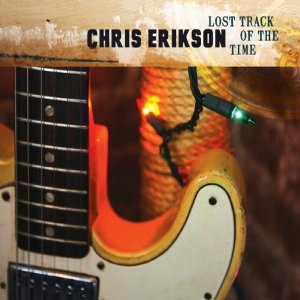 Chris Erikson has been a human being for over 40 years, a guitar player for over 30 years, a hired gun to NYC stalwarts (Tandy, Matt Keating, Florence Dore, Hem) for over 20 years, a dad for over 10 years and a solo recording artist for less than one year. So you can see how maybe he lost track of the time.


The current Brooklyn resident makes up for that by jam-packing his solo debut with smoke-filled songs of heartbreak, romance, wiseass broadsides to exes, hyperbole and heartbreak, each one caked with a droopy-eyed hopeful cynicism delivered with a lopsided Ted Mosby smirking grin. So many alt-country/no depression artists take themselves soooo seriously (I'm looking at you, Jay Farrar and Gary Louris), it's nice to see a sense of humor poke its nose through the flannel ("When I write my memoir, you'll barely get a mention").


For a slicker, Erikson's friendly drawl shows a hint of his southern origins (born in Atlanta, but moved to Connecticutt at the impreesionable age of one) on the cry-in-your-beer honky tonk weeper "Call It Even", where sly wordplay ("When you moved in, I paid the rent and never once complained / And though I hardly watched the cable bill stayed in my name / You burned through all my cigarettes and never bought a pack / Just one more thing gone up in smoke that's never coming back") catalogs the price of  love and recalls the Doug Sahm classic, "Give Back The Key to My Heart", and doesn't wilt by the comparison.


"Ear to The Ground" is the should have been a hit candidate, all jangly guitars up in your grill, making an absolutely joyous sound on a chorus so catchy it should be inoculated, all the while waiting to be discovered by some big-hatted hunk and taken to the bank. There's a lot more to be discovered on this excellent debut (the giddy pedal steel on "When I Write My Memoir", the sad-sack boogie-woogie hyperbole of closer "The Worst Thing That Ever Happened", not to mention the handclaps on "All I Need", which also features pure, brief serve-the-song soloing that makes me want to force feed it to the overplayers), so you should snag a copy of LostTrack of the Time so it's not another 40 years until the next record.
Chris Erikson - "Ear to The Ground" (from Lost Track of The Time)
Chris Erikson - "Call It Even" (from Lost Track of the Time)
Uncle Tupelo - "Give Back The Key to My Heart" (from Anodyne)
For those in the Phily area, Erikson will be playing in Scott McClatchy's band next Saturday, September 15, at the second annual Haverford Music Festival, in glorious downtown Havertown.
Posted by Trip McClatchy at 1:03 AM No comments:


“Are you familiar with a guy named Joe South?” Ric asked.

“Joe South is a kind of legend in the business,” Ric said. “I’ve never met him, but I’ve always been fascinated by him. He had a couple of hits a long time ago. ‘Games People Play’ was one of them. And he was a terrific guitar player. He played on Blonde on Blonde and Lady Soul. He also wrote songs that became big hits for other people. Do you remember ‘Yo-Yo’ by the Osmonds? He wrote that. ‘Hush’ by Deep Purple? He wrote that. “I Never Promised You a Rose Garden” by Lynn Anderson? He wrote that, too. You think anyone else ever wrote hits for the Osmonds, Deep Purple and Lynn Anderson? The guy made it in the business not because he was the best at anything, but because he was really good at a lot of things. I’ve always thought that you were like him.”

From my forthcoming novel XL.
Posted by Michael Atchison at 1:27 PM No comments: