Meet Me in the Morning (or else)

It's been a slow week here as we prepare for our wall-to-wall coverage of the release of Bruce Springsteen's Magic album (really, if we don't talk about it, who will?). To reward your patience, dear readers, we give you this ferocious live collaboration between Bob Dylan and Jack White on the Bard's "Meet Me in the Morning," one of my favorite tunes from Blood on the Tracks. It comes courtesy of Heather, who has all the details, but can it really be that this was the first time Dylan has ever played the song live? Wow.

Bob Dylan and Jack White, Meet Me in the Morning (live)
Posted by Michael Atchison at 11:57 AM No comments:

It's "The Pina Colada Song" come to life

Admit it, back when you were grooving to Rupert Holmes's schmaltz classic, you thought "that could never happen." Guess again.
Posted by Michael Atchison at 12:48 PM 1 comment:

Sorry, honey, I forgot our anniversary

It occurs to me that Teenage Kicks recently had its first birthday, but neither of us noticed. How are we going to supplant Rolling Stone as the pinnacle of hipster cred if we don't continually celebrate our history with retrospective pieces? So here's a half-hearted effort. If you want to go back to the beginning, click here and here, but forgive the font colors, which were a victim of the site's epic redesign a few months back. And listen to these songs that Graham Parker and Roxy Music recorded especially for the occasion.

There are songs that once you hear them, they immediately feel like part of your DNA. When I first heard Arthur Alexander’s “You Better Move On”, it was on Mink DeVille’s extraordinary fourth cd, Coup de Grace. On this disc Willy DeVille finally found that elusive perfect mix of Spanish Harlem and Bowery cool. And “You Better Move On”, with its street corner harmonies, lilting guitar, gauzy marimbas and city slicker cool vocals made it not only the album’s centerpiece but a sweet tribute to the song’s author. I needed to investigate this guy.

Arthur Alexander was a giant… literally. Standing about 6’10”, this soul music titan in one cathartic moment birthed the legendary Muscle Shoals sound with the cautionary warning to a rival suitor, “You Better Move On”. His elegant mixture of simple backwoods country and deep fried southern soul caught the ears of The Beatles, The Rolling Stones, The Who and Bob Dylan – all who recorded his songs. After his early successes, Alexander struggled to cope with bad business deals and became disillusioned with the music industry. He was driving a bus in Cleveland for years when he was coaxed into returning to the studio via Elektra’s American Explorer series. Incredibly, the resulting album, Lonely Just Like Me, was an unqualified success. Just as he was reaping the rewards of his “second act” success, he died of heart failure in June 1993 in Nashville.

In a 1987 Billboard article, Rolling Stones guitarist Keith Richards related, "When the Beatles and the Stones got their first chances to record, one did 'Anna,' and the other did 'You Better Move On.' That should tell you enough!"
With the imminent release (October 9) of an updated and expanded version of Lonely Just Like Me: The Final Chapter it’s time for a rediscovery of the singular talent of Arthur Alexander. Here are three different takes on “You Better Move On”, with Alexander’s version taken from a 1993 Fresh Air performance.
mp3 - Arthur Alexander live version
mp3 - Mink DeVille
mp3 - Rolling Stones
Posted by Trip McClatchy at 11:35 PM 2 comments:

My buddy Brian, one of the smartest, funniest, best people I know, and a world-class husband, dad, friend and raconteur, turns 40 today. There are a million things you should know about him, but to accommodate this space, I’ll list just four:

1. He rose from the hardscrabble streets of Lincoln, Nebraska to conquer the world of securities law.

2. He once played trumpet in a band that later included Motley Crue’s Tommy Lee.

3. He can write a mutual fund prospectus that reads like epic fiction, with his recurring hero, good-hearted billionaire James McFluffernutter repeatedly vanquishing the evil forces of heavy-handed regulators.

So friends, please join me in raising a glass of Irish to one of the good guys on this milestone occasion.

The Replacements – 20th Century Boy (live)
Modern English – I Melt With You
Posted by Michael Atchison at 7:43 AM 2 comments: 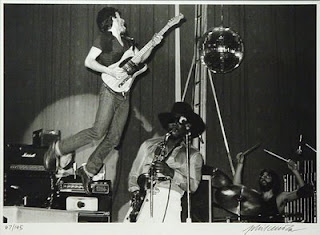 Whenever one of my most reverently-loved artists (Stones, Dylan, Springsteen) is set to release a new album, I find myself obsessing about the past, going back to the recordings I love best, reacquainting, preparing, reliving.

With Bruce Springsteen’s Magic due to land on October 2 (more on it later), I have delved into the past of rock and roll’s future, and I can’t stop listening. And it’s not Born to Run or Darkness on the Edge of Town that has me rapt. It’s an artifact simple, fascinating, commercially unavailable, and for me, completely mesmerizing.

The hard core fans, I’m sure, have been listening to this show for years. But I’m not much into bootlegs, and I became aware of it only a few weeks ago thanks to Heather at I am Fuel . . . who posted it in a zip file (go here to get it for yourself). Though there are a few of the audio problems inherent in recordings of dubious provenance (an otherwise hypnotic eighteen-minute “New York City Serenade” suffers), for the most part the sound (taken from a Philadelphia radio broadcast) is terrific, and the show can be enjoyed on its own as a kick-ass rock concert by a hungry band on the precipice of stardom, a two-and-a-half hour high wire act that can provide chills more than three decades later.

But it’s also a glimpse into the creative process. Born to Run, the album that changed everything for Springsteen, was more than six months from release, and its songs were incubating on stage that night. A perusal of old set lists suggests that four songs that would appear on the album made their live debut, including the title track, in its definitive form, having already been recorded with an E Street Band that included keyboardist David Sancious and drummer Ernest “Boom” Carter, who departed the previous August. But that song, a perfect studio creation, is rarely a revelation live, its dense construction not made for spontaneity. “Jungleland” and “She’s the One,” on the other hand, each presented as nearly complete works in progress, offer the band room to move. Still, undoubtedly, the real treasure here is the first performance of “Wings for Wheels,” which over the next few weeks would rather dramatically transform into “Thunder Road,” one of the Boss’s best-loved songs. In the documentary that accompanied the 30th anniversary edition of Born to Run, it’s striking just how hard the young Springsteen strives to create a monument massive and timeless. And that striving is on display with “Wings for Wheels,” which is brilliant as is. Only the rarest artist would take something so good and dismantle it hoping to achieve something better. But that’s exactly what Springsteen is in the process of doing here. (As an added bonus, “A Love So Fine,” a precursor to the treasured rarity “So Young and So in Love” also appears).

The most fascinating thing about the recording, though, may be the transformation happening within the band. Roy Bittan and Max Weinberg had joined just a few months earlier, violinist/vocalist Suki Lahav was nearing the end of her brief tenure, and Steven Van Zandt had not yet joined. The band was completing a shift from the soaring, jazzy sound propelled by Sancious and original drummer Vini Lopez, to a hard, grounded R&B that was all open road and Detroit muscle. Nowhere is the transformation more apparent than on “E Street Shuffle,” a signature song for the previously-configured band. On The Wild, the Innocent and the E Street Shuffle, Springsteen’s second album, the song swings and dances, feinting and charging like a fit welterweight over the band’s polyrhythms and Springsteen’s playful approach. At the Main Point, though, the song spins around the Bittan/Weinberg axis and turns slow and serious as Springsteen quotes Sam Cooke and the band channels Van Morrison, the Impressions and Booker T & the MGs, trading speed for power, wings for wheels. This is the band we know best, the one we seem to have known forever. But to hear them in this context is to hear the Beatles at the Cavern Club or Elvis at Sun Studios. It is to hear sparks fly on E Street.
Posted by Michael Atchison at 10:27 AM 1 comment:

Dying is easy, comedy is hard

I didn't watch the Emmys last night (didn't even know they were on), but I saw this today and chortled.

Posted by Michael Atchison at 12:00 PM No comments: 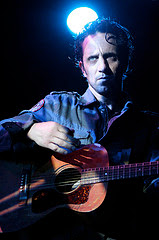 We've stumbled upon an idea to bring you, our faithful reader(s?), more incentive to visit us. It's simple really... more music. So today is the first in a series cleverly titled, Teenage Kicks Presents...
We'll start with Ike Reilly - a verbose, profanely funny, hook happy beat punk who fronts the self-mythologizing Ike Reilly Assassination. Having recently released what is possibly a carrer best disc (it's a dead heat with 2001's Salesmen and Racists), 2007's We Belong to The Staggering Evening should find its way on to many year end top 10 lists.
"Valentine's Day in Juarez" is a Dylan-esque sing-song chronicle of a lost Mexican weekend featuring a litany of artificial stimulants that fueled the reverie. A little "Rainy Day Women", a little "Stuck Inside of Mobile Wiht the Memphis Blues Again".
--
Two earlier songs, both exuberant celebrations and condemantions of pop culture and doomed romance. Exhilarating stuff. And in case you're not convinced, the IRA is also my 10 year old son's favorite band.
--
"Baby... you been on my mind."
--
mp3 - Valentine's Day in Juarez (We Belong to The Staggering Evening)
--
mp3 - Hip Hop Thighs # 17 (Salesmen and Racists)