She & Him for You 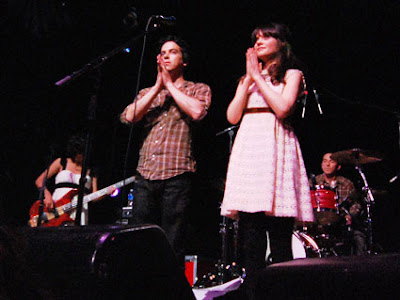 Hopefully by now you've all bought the disc/legally downloaded/stolen Volume One, the debut by She and Him, featuring wide-eyed indie ingenue Zooey Deschanel (you know her from Elf) and hipster guitarist and man-about-town M Ward. It's a wonderful throwback to 3 minute, slick girl group pop with just enough fuzziness to keep it rooted in 2008. Deschanel's voice has an earthy, wobbly charm as she channels Jenny Lewis channeling Laura Nyro.

Here's one cut from Volume One, four live tracks from a KCRW session earlier this year (including "Magic Trick", an M Ward cut from Post-War), a perfectly sweet live take of "Bring It On Home to Me" and a cover of Richard Thompson's "When I Get to The Border" recorded for a soundtrack for The Go Getter.

Why Do You Let Me Stay Here (from Volume One)

You Really Got A Hold On Me (KCRW)

Bring It On Home to Me (Acoustic)

When I Get to The Border (from the film The Go Getter)
Posted by Trip McClatchy at 9:23 PM