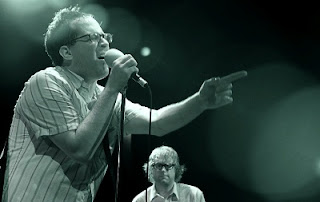 They’re back and they’re sequestered.

The Hold Steady is set to release its fourth album, Stay Positive, on July 15. Can it live up to the impossibly high standards of the band’s first three discs? If the newly released single “Sequestered in Memphis” is any indication, the answer is an emphatic “yes.” Hear it here. Buy it at iTunes.

Sometimes I talk to Tad Kubler, the band’s lead guitar player. Not in real life; that would be weird. Instead, I carry on these conversations in my head, little fake interviews. And one of my questions always goes like this: “Koob, tell me straight, sometimes when you’re in the studio with Craig, do you just bust out laughing your ass off at how ridiculously awesome that dude can be?” According to this blog post from John Agnello, who produced the new album (and the last one), that’s exactly what happens:

Craig had been messing around with lyrics at rehearsal, adding certain ones, dropping some, changing vocal inflections and entrances. We all knew that basis of the song, but it wasn’t until Craig actually started the lead vocal for the song, that I got to hear the entire story. On his second take of the song, after I had checked the vocal sound, me and Tad, who had stopped in to be on call, were laughing our asses off about how good it was! Whenever I hear the song, I can see Craig singing it!

The Hold Steady: Comedy, tragedy and debauchery, coming to a city near you.
Posted by Michael Atchison at 1:41 PM