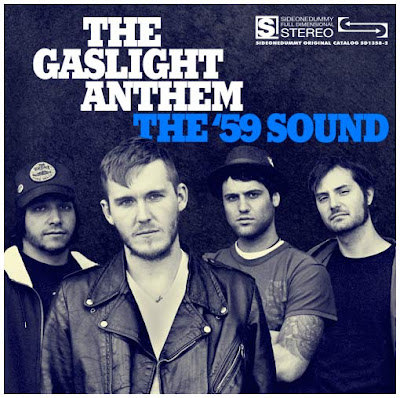 Real rock and roll never goes out of fashion. I won’t bore you with the names of the non-real rock and rollers, but you know who they are. New Brunswick, NJ’s favorite sons The Gaslight Anthem have unleashed The '59 Sound, a stunning sophomore album that ranks as one of the year’s best. Combining the urgency of punk rock’s explosiveness with rockabilly’s shuffling backbeat, these Jersey greasers are classic American rockers who can unabashedly and un-ironically write lines like these from “Meet Me By The River’s Edge”:

“See I’ve been here for 28 years
Pounding sweat beneath these wheels
We tattooed lines beneath our skin
No surrender, my Bobby Jean”

Which brings us to the elephant sitting in the middle of the room – this band owes such a debt to Bruce Springsteen that to ignore that influence would be to overlook one of their greatest strengths. The small town struggles, Mary’s red dress, washing these sins away, rock and roll as escape, carnival lights and yes, Bobby Jean, can be part of more than one songwriter’s lexicon. And who better to be influenced by than Bruce Springsteen? Do we really need another bunch of anorexic, pasty faced wallflowers citing Can, Kraftwerk and Eno as their heroes?

The Springsteen comparisons are not really for the band's sound but for the small town, heart on your sleeve songwriting and lyrics that either were lifted directly from Springsteen songs or feel like they were cobbled together from scraps on the Boss' cutting room floor. If I didn't love this record, I'd almost cringe at the overt lyrical Bruce homage, but it feels so natural that it’s endearing. Non-Bruce heads will have a field day tearing it to shreds.

But there are plenty of other influences – many referred to directly in the lyrics. Besides the many nods to Springsteen, there’s also the Rolling Stones, Tom Waits, Hank Williams, Bobs Dylan and Seger, Lou Reed, Elvis, Tom Petty, Miles Davis, Otis Redding, Wilson Pickett, Gary U.S. Bonds, Sam Cooke, Wilson Pickett and Marvin Gaye. If that doesn’t sound like your record collection, it should. And if that list doesn’t wanna make you buy this record, it should.

So do who do they sound like? I hear a scuzzier Rhett Miller mixed with the less preening bits of Brandon Flowers, crossed with Eddie Cochran and Gene Vincent and, I kid you not, a little bit of the Fonz (the one that cruised back alleys, not the malt shop). The album kicks off with the exhilarating 1-2 adrenaline blast of “Great Expectations” (complete with an opening needle drop on an old soul record) and “The 59 Sound” that doesn’t let up until the wistful valentine regrets to old lovers of “Here’s Looking at You, Kid” (Bogie, Hepburn and Marilyn also appear).

This is a record for those who haven’t bought one since Born to Run as well as those captivated by current backstreet kings The Hold Steady. Even though it seems to have ignored most of the pop culture of the last 40 years, this is a record that feels so fresh and invigorating, it reminds me how I feel when I hear Chuck Berry or The Four Tops on the radio. Yeah, maybe it’s been done before, but real rock and roll never goes out of fashion.

It is possible to like Eno, Kraftwerk, and Springsteen at the same time.

On the money, Trip. Between the XPN boardie buzz and Tom Moon's NPR review (even my minimally-rocking missus mentioned hearing about them) I felt compelled to download them from eMusic. Glad I did.

Thanks Trip. Another revelation thanks to you. See you @ SWSX in 2010!