The Fratellis and The Airborne Toxic Event - TLA 9/4/08 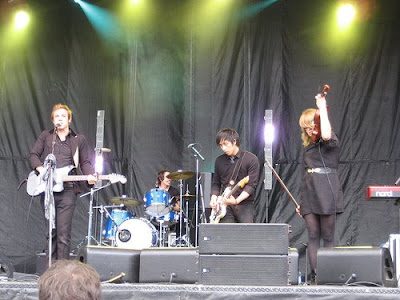 Often the best (or worst) part of a concert is the surprise effect - as in surprise at the magnificent power of a band's live show, surprise that yet again the tallest human on earth is directly in front of you, surprise at the song selection, surprise that a beer is six bucks!, surprise at the quality of sound, surprise at the number of folks violating concert laws both # 1 (don’t wear the band's shirt) and # 7 (2 beer minimum, 6 beer maximum... enjoy the show fellas, but try to remain upright), my wife’s surprise that Craig Finn looks just like that, and, as was the case last Thursday at Philly’s TLA, the best concert surprise of all – the great opening act.
Since I missed the Electric Touch’s set, my de facto opener was The Airborne Toxic Event. The band’s atrocious name was apparently taken from a passage in White Noise, a novel by Don DeLillo, a central figure of literary postmodernism. (Seriously, I never heard of Don DiLillo prior to googling the band’s name earlier today. And literary postmodernism – puh-leeze. I assumed the band had a flatulence issue.) The band sits between the literary yelping of Will Sheff and Okkervil River and the alt rock and reel of the Arcade Fire. Opening with the spastic roll of “Papillon” (which recalls a caffeinated version of po-facers The National) and the thumping lamnet of love lost “Gasoline”, it’s quickly evident that Airborne Toxic Event’s live show will be tough to top. After playing the bulk of their debut, including standouts “Happiness is Overrated”, “Does This Mean You’re Moving On?” and the desperate “Sometime Around Midnight”, it’s clear ATE main man Mikel Jollett, who seems to be having an absolute blast on stage, has penned a cathartic groups of songs that all seem to deal with deep loss and heartbreak. And in time honored fashion, he’s added soaring arrangements and urgent melodies to clearly still healing emotional scars… life strife makes good art. Personally he may be coming apart, but Jollett’s band feels on the edge of exploding in a different way.
While the ATE gave a great bar show in a theater, The Fratellis provided a by numbers arena show in a bar. While their debut cd remains on the short list of 2007’s best discs, the new Here We Stand dials down the hook happy bubblegum spunk of Costello Music in favor of more muscular but less satisfying arena rock. It ain’t no sin to shoot for the stars, but The Fratellis seem to have lost some of that youthful glow in the last year. Playing with a modicum of stage presence and a boring psych-rock light show complete with fog machine, The Fratellis alternated between pop punk brilliance and too many aimless, jambling pedestrian bluesy rawkers. There’s no denying the giddy rush and exuberance of “Flathead”, “Chelsea Dagger” and “Whistle For The Choir”, it’s textbook pop hitmaking, but The Fratellis seem to have already peaked.
This particular night, it was ATE in a TKO.

Glad you enjoyed ATE, but you really wanna slag Don DeLillo? I should have loaned you my copy of Libra when you were in town. Dude can write.