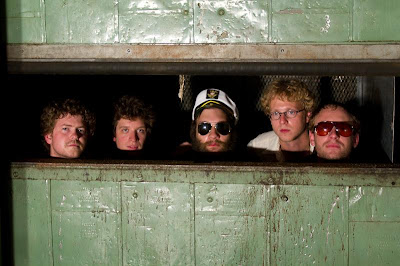 Deer Tick today dropped "Miss K", which quite simply sounds like the best thing they've ever done, and it may only be the second best John McCauley song this year, # 1 still in lockdown by Middle Brother's "Daydreaming". Deer Tick has been steadily morphing with each release, from the spazzy punk folk of War Elephant, the country rock of Born on Flag Day and the moodier but bracing alt-soul-scuzz of The Black Dirt Sessions, where the volume was turned down while the intensity soared. And now we can get our drink on while we await what promises to be the greatest Deer Tick of all, Divine Providence, out October 25th on Partisan Records.

John McCauley is on fire, with Deer Tick tearing up clubs across the country, festive solo shows, the ridiculous greatness of Deervana and as the heart and soul (and breakout star) of Middle Brother. McCauley is forging a reputation as a monster songwriter, with a scabby, craggy voice that delivers songs with a white-hot intensity calling to mind Paul Westerberg, while Deer Tick's manic, booze-fueled live show is drawing comparisons to The Replacements.

Here's what main Tick McCauley has to say about the upcoming record:

Based on the above, I proclaim Divine Providence one of the best records of the year and I've only heard one song. Let the hype begin!

Thanks for heads up! Between Deer Tick, Spider Bags and Titus Andronicus, the drunken Americana of the 'Mats is clearly alive and well. Love the covers!