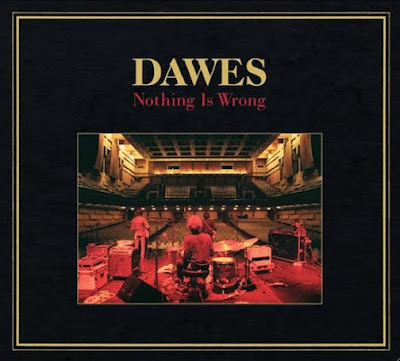 Since I am crushing on their brand new album, Nothing is Wrong, in a pretty unhealthy way, I feel it is my civic duty to inform you that you have three chances to catch Dawes today. Two are free and the third one is a perfectly matched sad-eyed bill with M Ward and Bright Eyes guaranteed to fill your daily quota of heartbreak and joy.

For those who place those first four Jackson Browne albums on some mystical higher plane (and really... who doesn't?), all I can tell you is you need to snag Nothing is Wrong TODAY, preferably at Main Street Music where Dawes performs a crazy intimate acoustic show for 60 lucky wristband holders. Or you can drink your lunch at World Cafe Live for WXPN's Free At Noon show with the boys. Or cough up some of your hard earned and get an americana dream bill at The Mann.

Taylor Goldsmith is on a roll - first with Dawes' debut North Hills, then Middle Brother's giddy romp, on to backing up Robbie Robertson and now laying waste to the sophomore slump with an album filled with such effortless, conversational songwriting that even lyrics about "piling on those mashed potatoes" and grabbing an "extra chicken wing" work perfectly. There are 11 songs and each one will be your favorite for at least a while. If he gives you a stock tip, buy without hesitation.

Nothing is Wrong is the Jackson Browne album you've been waiting for since The Pretender.
Dawes at World Cafe Live - 12:00 (sign up here)

Dawes (with Bright Eyes and M Ward) at The Mann Music Center (Dawes on 7:30)

Dawes - "Time Spent in Los Angeles" (from Nothing is Wrong)

Warren Zevon is an amazing songwriter. I wrote a really interesting blog post about him here too: http://feelingmyage.co.uk/?p=316