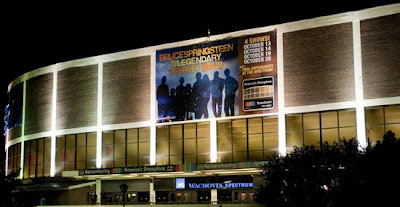 10/13/09 – Bruce Springsteen and the E Street Band open a four night stand as they play The Spectrum one last time… or four last times. Nostalgia has a way of refocusing the lens of time so that if we squint hard enough that a sports arena that housed its share of bad basketball teams, who-cares hockey teams, mutant circuses, pound-of-flesh-taking Disney extravaganzas and dinosaur rock bands somehow gets remembered as a quaint little showcase. Now we shut the old girl down and every gig becomes a must-see last gig. The good news is Springsteen rarely fails to deliver (I’m willing to forget the acoustic shows and the by-numbers Human Touch/Lucky Town tour if you are).

If you’re fortunate enough to have seen this tour (or at least don't live in Kansas City), I hope you saw a Born to Run show. From the mournful, opening call of “Thunder Road’s" harmonica and piano through the final, wounded howl of “Jungleland”, seeing Springsteen’s 1975 masterpiece start to finish was goose bump city. Yeah, the diehards were soiling themselves over rarities like “Seaside Bar Song”, “The Fever” or “This Hard Land”, but only because they were rare, not because they cold hold a candle to songs like “She’s The One”, “Backstreets”, “Meeting Across The River” (itself a bit of a rarity) or the twin titans of the title track and “Thunder Road”. Born To Run is the greatest American rock and roll record ever made and seeing Springsteen and the band tear through it was exhilarating and life-affirming, but also sadly beautiful.

And that’s because it really feels like this is the last tour for this configuration of the E Street Band. And this is the way to go out – not at their peak (nothing will top the legendary shows from the E Street Band’s first decade), but a still dynamic brotherhood who on their best nights can still summon the essence of rock and roll. The reason that believers still swear by Springsteen’s live show are the small moments that demonstrate that rock and roll should, at its core, be about fun. Think about that simple concept – FUN. (Ed. Note: It makes me wanna smack Jay Farrar). The local flavor inserted into the new “Wrecking Ball” (“cheesesteaks are as big as airplanes”), the request granting (a “Can I Sing” poster gets a little schoolgirl a show-stopping duet on “Waiting on a Sunny Day that also includes a kiss), another delirious little girl being twirled during “Dancing in The Dark”, the garage stomp of “Little Bit O Soul” complete with po-face mugging about his AARP cover appearance, are all topped off with the greatest of encore songs, “Rosalita”.

If this is indeed the last full blown E Street tour, as I’m positive we’ll see Springsteen down the road, I’ll just say:

“Well if you do you'll know I'm thinking of you and all the miles in between
And I'm just calling one last time not to change your mind
But just to say I miss you baby, good luck goodbye”
.
Bruce Springsteen & The E Street Band - "Thunder Road" (12/28/75 - Tower Theater)
Posted by Trip McClatchy at 11:53 PM