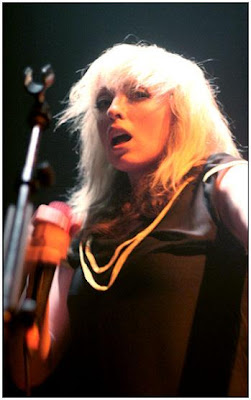 Bounc-ting on the stage like the bleach blonde spawn of Debbie Harry, Chrissie Hynde and Nancy Sinatra (or Nina Persson for you hipsters), Ting Ting lead tinger Katie White launched a slap-happy new wave dance party that wouldn’t let up at last night’s sold out Philadelphia show. The Ting Tings are a British role reversed White Stripes with the emphasis on the groove rather than the riff.

Opening with the piano driven opening of insistent percolator "We Walk", it was clear there would be no tentative stage theatrics from this bubbly, beat crazy duo. They raced through 8 of 10 songs from their debut disc in a whirlwhind 35 minute set. Highlights included ipod star maker "Shut Up And Let Me Go" (a kiss off/demand for their former record label) which sounds like a great lost Blondie classic, the edgy lost girl lament "That's Not My Name" and the electro whimsy of lover's plea "Traffic Light" ("our slow one" according to White) ditches the big beat for a 60's styled soft pop treatment. The show's sole encore was a cacaphonous, eight minute rave-up of title track "We Started Nothing" which showed the couple could cause quite a ruckus.

The Ting Tings won't save rock and roll, and my guess is their album will soon be consigned to the summer of '08 obscurity pile, but they were able to electrify a room on a steamy, stormy July night at Philadelphia's best venue. (And can we give it up one time for Johnny Brenda's... I'd see just about anybody there).

The Tings Tings - Shut Up And Let Me Go